The Complexity of Sales Taxation of Information Services

The proper taxation of “information services” under the New York Sales Tax Law can raise complex and costly issues resulting in difficult audits and even litigation. Three recent tax cases in New York nicely illustrate the painstaking and laborious burden that a business must bear once selected for examination. A review of these issues can provide taxpayers and their advisors with helpful insights that can assist in proper sales tax compliance as well as effective audit defense strategies.

Generally, sales of tangible personal property are broadly taxable, unless specifically exempt. The opposite is true for services, which must be specifically designated (i.e., enumerated) as taxable. Several states, including New York, impose tax on receipts from the sale of something called an information service. Accordingly, whether a service is properly classified as an information service is a critical determination.

New York Tax Law generally defines an information service as the furnishing of printed information, including the services of collecting, compiling, or analyzing information of any kind or nature and furnishing reports thereof [Tax Law section 1105(c)(1),(9)]. Examples include sales of a credit report, a stock market advisory and analysis report, and a product and marketing survey (20 N.Y.C.R.R. 527.3). Furthermore, the law contains a significant exclusion from taxation for information that is personal and individual in nature, and which is not or may not be substantially incorporated in reports furnished to other persons. In practice, both the definition and exclusion can prove difficult to apply.

There has been significant litigation with respect to the taxation of information services. On the one hand, consulting services, such as accounting and legal services, are clearly not subject to tax; on the other hand, because many other types of service businesses dabble in the conveyance of information, drawing a clear dividing line is a challenge.

Courts have explained that an information service is “the sale of the service of furnishing information by a business whose function it is to collect and disseminate information which is taxable under Tax Law 1105(c)(1) and not the mere sale of information” [In re SSOV’81 Ltd., DTA 810966 (Tax App. Trib. 1995)]. A service’s primary function controls whether it is subject to sales tax. The inquiry should focus on the service in its entirety, as opposed to reviewing merely its various components or means of delivery [e.g., Telecheck Services, Inc., DTA 822275 (DTA 2009)]. If a service’s primary function is the collection and dissemination of information, then the service may be taxable.

In the real world, this analysis requires a patient, methodical, and detailed breakdown of the underlying facts. Is this a business that is selling compiled information, akin to raw data, or is it selling some other service that happens to impart information? Three recent New York tax cases explore these issues in great detail and shed greater light on how these disputes, across three very different industries, can evolve into litigation. Each case will only be briefly summarized, but all merit closer consideration.

The taxpayer provides various levels of service, including certain “EAQuick reports.” After an examination (commencing in 2018 of periods during 2014–2017), the auditor agreed that most of the services were nontaxable consulting services but focused on these EAQuick reports as subject to tax. The auditor concluded these reports were “entry-level” reports consisting of a compilation of third-party data and a general summary. The reports typically consisted of several hundred pages of public-record source material accompanied by a one- or two-page summary analysis. Accordingly, the auditor concluded the primary function of the sale of these reports was the sale of compiled information, a taxable information service.

The taxpayer provides various service offerings, including certain AdIndex and CrossMedia services, which includes the development of survey questions followed by the gathering of data through surveys. After the data is cleaned, weighted, and evaluated, a research analyst prepares a PowerPoint report. The report does not present the underlying data itself; rather, it presents select data considered to be significant in evaluating the advertising campaign’s effectiveness. The report contains various graphs, tables, and charts, as well as certain recommendations and insights.

After an examination (commencing in 2014 of periods within 2011–2014), the auditor concluded the primary function of these services was the compilation and analysis of data itself; a taxable information service. In November 2019, the taxpayer litigated these issues before an administrative law judge. The taxpayer argued that its primary function was the provision of advice regarding how to improve a future advertising campaign and not the provision of the underlying survey data. The court, however, agreed with the auditor that the taxpayer’s expertise was in performing the marketing surveys themselves and that the various recommendations were subordinate to the service’s evaluation function and of little value without the data itself.

In August 2021, the taxpayer appealed that decision before the Tax Appeals Tribunal. Ultimately, the tribunal agreed that the services were taxable information services, but concluded that the one of the services—CrossMedia—nevertheless qualified for the statutory exclusion because the information was individual in nature and not provided in reports furnished to others. Under the facts, the taxpayer has been unable to create a useable database from which it could provide such information to third parties. Accordingly, the tribunal reasoned that the possibility that such information could be furnished to third parties in the future if a service provider develops a means to do so does not preclude application of the exclusion.

After a lengthy examination (commencing in 2012 of periods within 2007–2015), the auditor ultimately concluded in March 2018 that the taxpayer sold acting role descriptions (i.e., breakdowns) to talent agents in exchange for a monthly subscription fee; a taxable information service. It seems the auditor did not rigorously analyze the primary function of the service, believing the taxpayer merely provided a forum selling acting role descriptions.

At trial, the taxpayer demonstrated the many steps involved in its actor casting service. Among other items, it begins with a casting director submitting a breakdown for an acting role. The taxpayer reviews the breakdown and posts it. The talent representative is able to search for and view the breakdowns; the actor’s profile can be tailored as needed, and then submitted for a role. The casting director evaluates the actor profiles received and can then schedule auditions through the taxpayer. The talent director can confirm, reschedule, or decline an audition. After an actor auditions, the casting director uploads the recorded audition to the platform and presents hiring recommendations to the network/studio, all through the taxpayer’s website.

Based on these facts, the court concluded that the primary function of the taxpayer’s service is much more than the mere sale of acting role descriptions. The primary function is the facilitation of casting actors for roles—a nontaxable (consulting) service.

As these recent New York cases demonstrate, the proper classification and taxation of an information service can present significant challenges. What is the nature of the service at issue? Is the primary function the sale of compiled information or the sale of a consulting or other service? This can be difficult to tease out. Furthermore, from audit through litigation, these disputes can take years to resolve requiring the dedication of company resources, all the while accruing potential interest.

CPAs should be proactive by helping taxpayers evaluate their business operations and revenue streams in light of these issues. Deciding whether to register, collect, and remit sales tax on a given service or having a well-reasoned and measured basis for treating a service as nontaxable could save significant resources in the event of an audit. 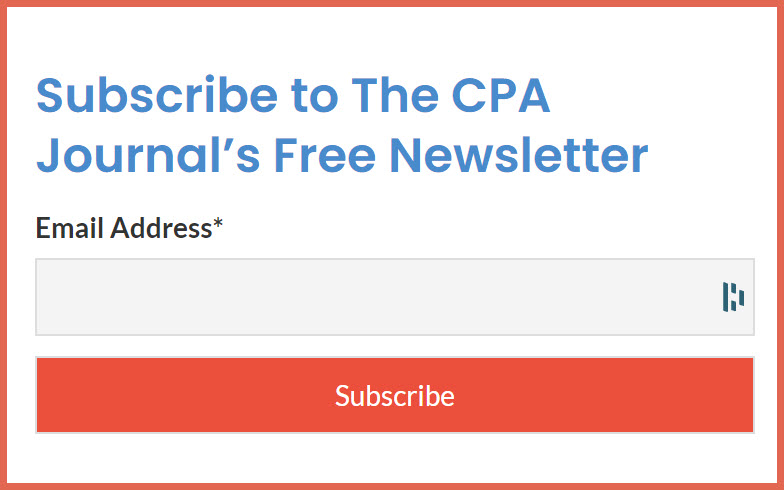 The CPA Journal is known as the “Voice of the Profession,” and is The New York State Society of CPA’s monthly flagship publication and top member resource. An award-winning magazine and finalist for excellence in journalism (2018, 2017 FOLIO magazine awards), The Journal has over 95% nationally focused content written by thought leaders in the accounting and finance industry.

For more than 85 years, The CPA Journal has been earning its reputation as an objective, critical source of information on issues of interest to CPAs. The Journal provides analysis, perspective, and debate on the issues that affect the CPA profession. Major topics include accounting and auditing, taxation, personal financial planning, finance, technology, and professional ethics. The CPA Journal is issued monthly in print, and offers daily insight and analysis digitally here on cpajournal.com. Published by the New York State Society of CPAs, The Journal’s active editorial and review process ensures thorough technical quality and material relevant to CPAs in public practice, industry, government and education.